MAC Construction is honored to accept the ABC Award of Excellence for the Clifton Heights CSO Storage Basin Contract constructed for MSD Louisville and Engineered by GRW Engineers. 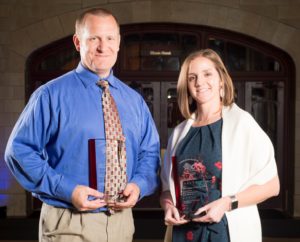 This was a $26.3 million-dollar public works project that spanned the size of a football field and is located directly behind Mellwood Arts Center. The construction involved cutting 45’ deep into rock to create the 7-million-gallon combined sewer overflow (CSO) basin using a novel single-sided concrete form system. The length of the project was 28 months.

This system diverts capacity overflows directly into the large storage basin which stores it temporarily and eventually pumps it into existing infrastructure for treatment after the storm event is over. This system helps minimize sanitary sewer discharges into storm drainage systems, and ultimately, into the Ohio River. 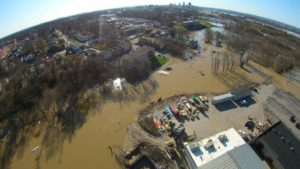 MAC Construction decided to utilize a single face form system for the massive retaining walls, which included wall anchors. The rock wall became the back face of the form.  This method eliminated the impact of cost and schedule of additional excavation that would have been required with conventional 2-sided forming methods.

This project was part of the EPA Consent Decree to clean up overflow situations into waterways. The project required about 70,000 cubic yards of excavation. MAC Construction found a nearby location to take the waste, saving time and resources by using the excavated rock to fill the ravine and expand the VA Hospital parking lot. 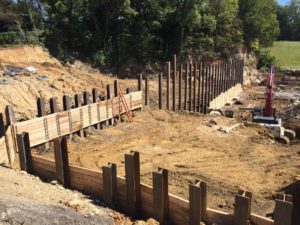 Geoff Shumaker PE from the Department of Veterans Affairs said “MAC Construction was able to reduce transportation time and vehicle emissions instead of hauling materials to a processing facility. VA was able to minimize construction costs by filling previously unusable VA property into useable parking spaces with recycled materials.”

These efforts paid off in a big way for the VA hospital, producing over 400 new parking spaces for the VA out of the project.

In February of 2018, the Basin completely flooded out in due to a flood event that exceeded nearly 20 feet above the normal pool. MAC Construction had installed a temporary dike as a precaution. Despite it being twice the height than the design requirement, the Ohio River swelled over the dike. The aftermath of clean-up and remobilizing presented a massive undertaking. 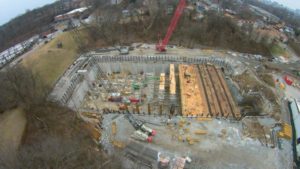 Synchronizing 127 subcontractors and suppliers, including MBE/WBE firms, MAC Construction was able to successfully complete the project within the scheduled parameters. The result is a storm event holding tank as a sustainable solution to eliminate storm, sewer, and Ohio River overflows, all while working within the parameters of the EPA Consent Decree with Louisville MSD.